TCIPG PI and ITI researcher William H. Sanders has received the 2016 IEEE Technical Field Award, Innovation in Societal Infrastructure, for his revolutionary work concerning cybersecurity of the power grid. The award recognizes Sanders’ work as some of the most significant in his field. 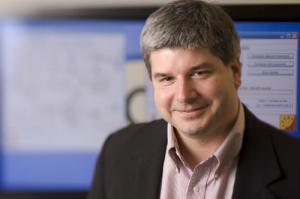 The award recognizes Sanders’s fundamental research in this area and its impact within industry and cites him for his “assessment-driven design of trustworthy cyber infrastructures for societal-scale systems."

Sanders, a Donald Biggar Willett Professor of Engineering and ECE department head, recognized and began to work on the power grid cyber security challenge much earlier than most researchers, around the turn of the century. Motivated by this realization, has worked in every part of the field, from the distribution-side, including smart meters, to long-haul transmission networks.

“It took some time to convince people that grid security and cyber security and resiliency was a serious challenge,” he said.

The real focus began in 2003, after the major blackout in the northeast showed people the fragility of the grid.

“That focused people’s attention on the need for trustworthy power grids – a realization that became even more important given the whole smart grid revolution that came later,” he said.

Sanders has made pioneering contributions to make sure the power grid is safe, secure, reliable, and available. He did so by developing tools and techniques to make the grid more resilient, and methods for quantitatively assessing its cyber security and resiliency.

In 2005, Sanders created TCIP, the Trustworthy Cyber Infrastructure for Power center, to combine computer security and power systems research as a unified front to address the problem. In 2009, this work continued through his leadership of TCIPG, a $18.4M DOE Office of Electricity Delivery & Energy Reliability and DHS Office of Science and Technology sponsored activity. He’s now co-PI of the Cyber Resilient Energy Delivery Consortium, a $28.1 million initiative the U.S. Department of Energy is funding.

Within these efforts, he co-created tools to protect the power grid against malicious attackers on computer systems, including Amilyzer, a smart meter intrusion detection system. In the U.S., these boxes monitor 70 million meters for suspicious activity. He is also the co-inventor of NP-View, software to test NERC-CIP compliance of process control networks, and co-founder of Network Perception, Inc., which further develops and markets that technology.

“Even if attacks are partially successful, or even if some failures occur, the system should detect those, and respond, recover, and continue to perform its function,” he said.

He said his work wouldn’t be possible without ITI researchers Peter W. Sauer and David M. Nicol, as well as the many others involved in TCIP and TCIPG. Nicol is the director of ITI.

“The reason I have been able to make such progress is really because of collaborations with a great group of people,” he said.

Despite everything Sanders has done for the field, he said there’s still more to do. The attackers continue to become more sophisticated, so the security system has to increase in scope, size, and ability.

“We need to up our game in regard to the protection, and response systems we provide,” Sanders said. “We need to continue to innovate.”