TCIPG Project Director, William H. Sanders, has been named interim head of the Department of Electrical and Computer Engineering at the University of Illinois at Urbana-Champaign.

Since 2008 Sanders has served as director of the university’s Coordinated Science Laboratory (CSL), a premier, multidisciplinary research lab focused on information technology at the crossroads of computing, control, and communications. CSL’s annual research expenditures have nearly doubled during his tenure, reaching more than $37 million last fiscal year. 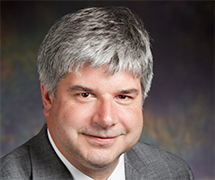 “Bill is a distinguished researcher and leader and I am excited that he has agreed to serve as the interim head of ECE” said Andreas Cangellaris, dean of Engineering at Illinois. “Under his leadership, CSL expanded and diversified its interdisciplinary research mission, and reaffirmed its claim as a global leader in groundbreaking research of broad societal relevance and impact.”

Sanders came to Illinois in 1994 as an associate professor of electrical and computer engineering and researcher in CSL. He earned the title of professor in 1998. His research is focused on dependability and security evaluation, fault-tolerant computing, reliable and secure distributed systems, and computer networks and protocols.

In 2004, he became the inaugural director of the Information Trust Institute (ITI), which provides national leadership combining research and education with industrial outreach in trustworthy and secure information systems. In ITI, he is also the principal investigator of the NSF/DOE/DHS Trustworthy Cyber Infrastructure for the Power Grid (TCIPG) Project. To date, the TCIPG project has received more than $26 million in funding.

In 2010, Sanders was appointed to the Smart Grid Advisory Committee of the National Institute of Standards and Technology (NIST), a federal agency that oversees measurement infrastructure. He also serves on the Department of Homeland Security’s steering committee to develop a roadmap for securing control systems in the nuclear sector and is a member of the Cyber Security Research Alliance (CSRA) advisory board.

He has published more than 200 technical papers and is co-developer of three tools for assessing the performance of systems represented as stochastic activity networks: METASAN, UltraSAN, and Möbius. He is also a co-developer of the Loki distributed system fault injector and the AQuA/ITUA middlewares for providing dependability/security to distributed and networked applications.